2600: A Hacker Odyssey is a thick book of articles and history from one of the best known (and longest-running) hacker magazines.

2600 was one of those magazines you  picked up and wondered, “you can print this stuff?” — then paid for it in cash. Back in the late ’90s when I came across this small 19x20cm magazine in the World Biggest Book Store, down near Yonge and Dundas. That was pre-“Square” and not the best area of Toronto in those days. 2600 was an exciting mix of ideas, code listings and assorted bits of knowledge that the subjects of the stories probably hoped would remain generally unknown. Compared to the stapled pamphlet-sized magazine, this is a big hard-cover book, almost 6cm thick and probably weighing half a kilo. This tome is broken into three sections, each covering a decade.

One thing that I was surprised to learn was Goldstein, besides it not being his real name (I fact I might have suspected, but just didn’t remember enough Orwell) was that Eric Corley had no formal computer education. In hindsight, that seems to be a testament to the idea that hacking is more about a desire to figure things out than computers per se. Instead, it could be said that hackers are just people looking for something to figure out and computer networks happen to be currently the biggest challenge around today, just as the phone systems were back in the 1980s. And the stories are not limited to computers either, mixed in with the tales (occasionally tall) are stories about all kinds of things from wiretapping to combination locks that just aren’t half as secure as marketed to pay-phone oddities.

See also  The Myths of Innovation

The book covers then the period of the 1980s to the mid-2000s. The 1980s  section sees the break-up of the Bell phone system in the U.S. and the arrival of the personal computer, the 1990s see hackers capture the imagination of Hollywood, and the 2000s sees the personal computer become another part of modern society.

The hacking ethos goes back many years, back to the 1960s if one looks for the first uses of the term. So the material in the chapter “The Hacker Philosophy” still resonates, even if most of the technical information is dated. The first section has a fair number of stories on the phone system and early personal computers. Some people have called this period the golden age of hacking; it’s the period covering the break-up of the U.S.  phone monopoly, the birth of the personal computer and the first hacker raids. So it makes sense that this was when the hacker ethos was formed.

The second section covers the 1990s, which is characterized as when the media and Hollywood discovered the computers, viruses and hackers. The decade saw films like 1995’s Hackers (on which Goldstein acted as a  technical consultant) and Sneakers (1992). It also continues to follow the changes in phone systems that made many of the discoveries in the 1980s  obsolete. In “More Hacker Stories and Adventures” there is coverage of  Kevin Mitnick and early computer viruses. The second section then can be thought of as the mainstreaming of computers when they emerged into popular culture.

See also  Revolution in the Valley

Reading this book reminded me what made computer fun originally. Each section covers a decade as seen by the writers of 2600. The 1980s as the birth of the modern hacker. The 1990s as the middle decade when the media discovered hackers. The 2000s when many of the topics covered in earlier chapters matured. Much of the technical material in the first two sections might seem dated, but the spirit is still there. One conclusion readers might get reading this book is the rather dismal (if predictable) conclusion that those who don’t understand technology fear those who do. But this is countered by the examples of how regular people in a democratic society can overcome these problems if they are willing to put effort into questioning why something is the way it is. It’s this lesson that readers should take from this book. 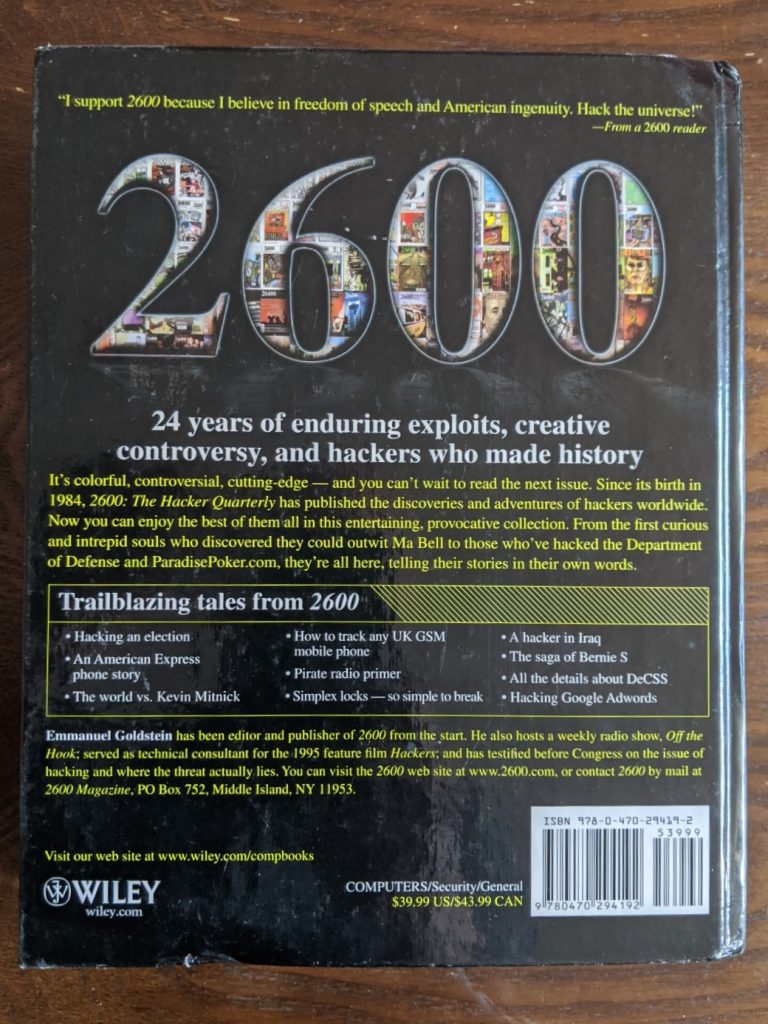